Houston, we have a problem… 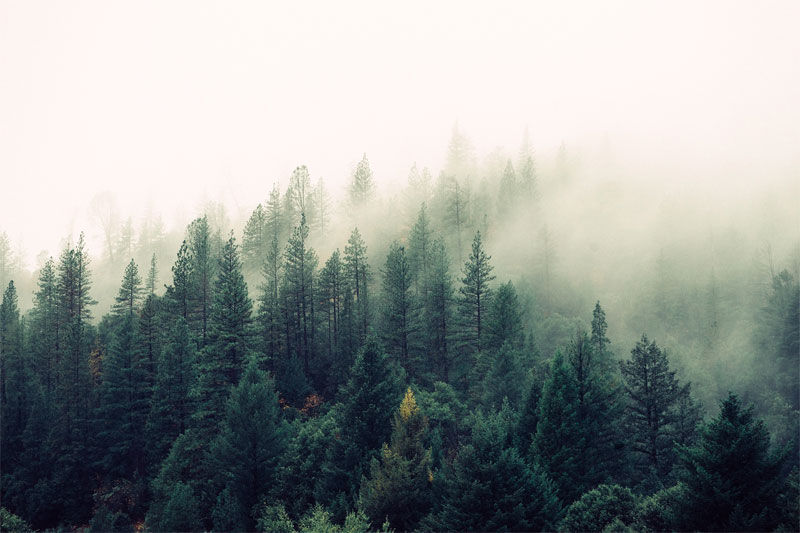 Our adventures with Houston began the day we rescued him on Father’s Day of 2010. Friends of ours had been fostering him through the SPCA, and after spending a few days with him, we decided we wanted to make him a permanent fixture in our home. I remember that day’s details very well, as I do most days that leave me with a story to tell. It is almost as if my subconscious knows what is unfolding in front of me, and it sucks up the little moments with a tad more enthusiasm than it would on a random Wednesday.

We walked into the Media, SPCA with tons of nervous energy and excitement. Houston was not actually at the facility — he was still at the foster home — but the paperwork needed filling out and our background checks had to be submitted, so we did as we were told. After gathering some of our basic information, they put a phone call in to our friends who were fostering Houston to be sure that they approved of our adoption. While the woman was on the phone, I remember standing at the counter and filling out the paperwork, and the only question that I remember reading over and over again was, “What would be a deal-breaker reason for you to give up your adopted pet?” At the time I looked at Mike and pointed to the paper, and half-whispered “I mean, if he bit someone, or something like that, right? I can’t think of anything else.” Mike gave me the “shoulder-shrug, head-tilt, nod” confirming that aggressive behavior would be our only deal-breaker. I wrote that down, and held my breath as I handed over the paperwork for inspection.

I was well aware that the questions were worded in a way that forced you to be realistic, and to take into account the depth of responsibility that adopting a dog brought on. But I would be lying if I said I wasn’t filling out the paperwork and wording my answers to appeal to the panel before me, rather than realistically assuming that this adoption wouldn’t be all peaches and cream.

After a few extra face-to-face questions and instructions we handed over our credit card, received a collar and a leash, and off we went to pick up our boy. We of course made a pit-stop at a pet store to buy all of the essentials and about $100 in toys and treats, and before we knew it he was in our home, and our hearts.

I remember being so excited to give Mike his first official Father’s Day card. I had signed it with a little sketch of a paw and “With Love, Your Boy Houston” inscribed on the bottom. I gave it to him while we were sitting on our living room couch, relishing in our rescue parent glory, while we let Houston frolic around his new home, discovering all of the glory we were gifting to him. We quickly fell into a state of chill, and just watched TV, pretty much forgetting that we had an animal running around a foreign land.

After about 15 minutes I decided to be a dutiful dog mom and check on Houston. I called his name down the basement steps and I could hear him rustling around, so I happily bounced my way down to our finished basement, only to freeze in horror upon landing on the bottom step. Our brand new bundle of joy, the dog that we said we wouldn’t dream of giving up unless he was human-aggressive, had successfully shredded two of our leather (ok, pleather) sectional couch cushions, in an attempt to hide his brand new toys from the other dogs who did not live in our home.

I just stood there, for what felt like an hour, staring into this adorable Pit Bull’s eyes, who had no idea what he had just done. His tail was wagging so hard that I swore there was an echo in the basement (now looking back it was probably just the sound of my heart beating out of my chest in anticipation of Mike’s reaction).

I finally jolted awake when I heard Mike yell from the living room, “Everything ok down there?!” I didn’t know what to say. I contemplated lying, and spending the rest of my days convincing Mike that the basement was haunted to avoid having to deal with this all together, but that seemed exhausting, so instead I just started to cry and yelled back, “I mean, no its not ok, but we can’t get rid of him, we literally just rescued him!” That was the first time that “deal-breaker” question began to replay in my head over and over again, and it certainly wouldn’t be the last.

One would think after that kind of introduction to dog-parenting, we would be thrust into reality, forced to deal with whatever underlying issues Houston had gathered over his 1 ½ years prior to meeting us. But you would be wrong. You see, in order to deal with issues, you must first admit to having them in the first place, and neither Mike nor I were at a point in our lives where we wanted to put that kind of work in. So we just dealt with it. Literally just dealt with whatever chaos welcomed us upon our arrival back home. You see, Houston has severe separation anxiety, which means that upon our departure, all of his anxieties comes to the surface, and he destroys whatever is in his path to escape. This behavior is extremely difficult to manage, because it happens when we are not there to correct it. So instead, we would come home full of anxiety ourselves, letting frustration turn into anger and correcting him the way you would a grown adult who purposefully behaved defiantly. This went on for an embarrassing length of time, we are talking 4+ years.

In the years leading up to us finally putting the work in to making this right, we just made light of this reality to make ourselves feel better about it. “Houston was sent to us to teach us patience,” was one of my favorite lines of bullshit that I liked to spew following a Houston story, and there were a lot of them. I would happily tell everyone the most recent debacle upon asking how he was doing, show them pictures of the damage, and round it out with a bullshit line about patience, love, and a good ol’ “whatcha gonna do!?” It had become part of our story, we were the parents of the cute dog who just so happened to ruin our house, but who we loved in spite of it all. But if we were being real, we were the selfish parents of a dog with separation anxiety, who were “too busy” to deal, and had been completely avoiding their responsibility to said dog. It wasn’t cute, it wasn’t fair, and it certainly wasn’t making our lives any easier.

But isn’t that true for most unpleasant circumstances in life? I know I could replace the name Houston with: my career, my relationships, finances, and the list goes on and on. It isn’t as fun of a story to tell, but we tell it to ourselves on a daily basis. “If I look the other way for long enough and yell at this issue with enough aggression and frustration, eventually it will get the point, and it will all work itself out. But in the meantime I am going to enjoy this beer, take this nap, and chill for a minute, because I am exhausted just thinking about it.”

I cannot tell you the amount of time that I have wasted, clocking into my part-time job “avoidance”. It is a career choice that I made long ago, under the impression that it felt like control, not having read that the job requirements were: anxiety, low self-esteem, and a lack of motivation. You see, much like my “Houston is teaching us patience” line, I had assumed that everything I was waiting for in life was simply teaching me how to be patient. When in reality, my definition of patience was ass-backwards. I wasn’t learning anything other than what it felt like to repeatedly be disappointed. I was simply waiting; waiting for the day that my career would take off, waiting for the day that I could come home without fear of destruction, waiting for someone else to do the work for me, because if I did it and failed, I would have to deal, and dealing wasn’t in the job description. Well, it wasn’t until now. Its funny how finding out you are pregnant changes your perspective overnight. And not in the way that I had been wishing things would change for so many years, but more in a “Oh God, this shit is going to be really awful, but if I don’t deal with it now, I am never going to have time to deal with it, come (insert due date).”

Now, I am not going to sit here and tell you that since finding out I was pregnant I have color coordinated all of my pre-existing issues, dealt with them accordingly, and have them filed under “Boss Lady”. No, that would be a boldfaced lie. But, I can say with integrity that I am dealing with shit as it happens. Some days I am extremely overwhelmed and I fall back into old habits, and the rest of the days you can find me walking the line of super productive, and “Well, at least I got the laundry done”. But I am a work in progress. Aren’t we all? I am happy to announce that Mike and I are being trained by a canine separation anxiety specialist, and Houston is reaping the benefits. But old habits die hard. And I am not referring to Houston’s habits, because his issues are not habits, but reflections of Mike and my occasional selfishness. But slowly but surely we are finding our way.

o at the end of the day, our adventures with Houston have taught me more about myself than I could have ever imagined. He has given me deeper insight on the definition of responsibility, patience, and consistency. He has forced me to come to terms with my fears of disappointment and abandonment. But most of all he has humbled me, by holding a mirror to my own insecurities and allowing me to own them in my own time, while still loving me unconditionally in spite of them. I can only hope that by working on myself, he will find a greater sense of security and trust in me, as I am starting to find in myself. 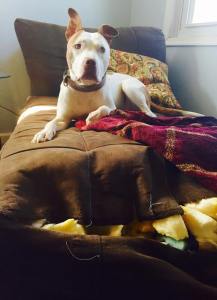 Hold back the river… 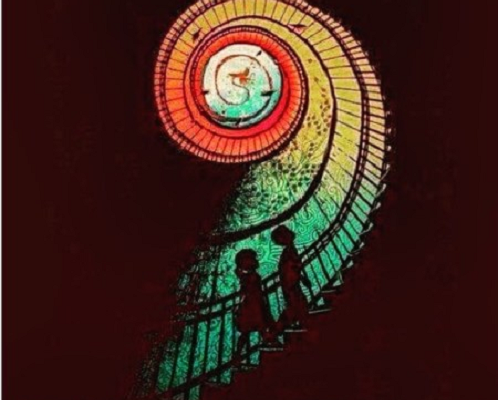 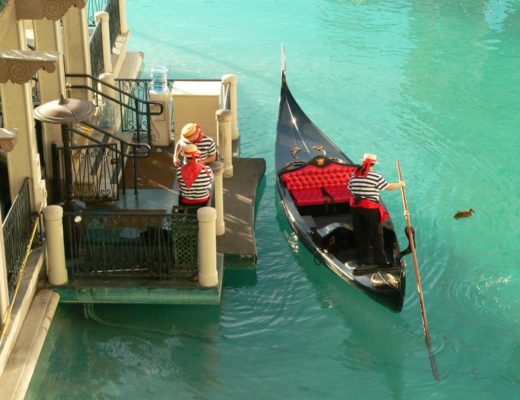